The Washington Metropolitan Golf Association (WMGA) and its predecessor organization (the District of Columbia Golf Association) have been serving Washington area golfers since 1914. The WMGA is comprised of member golf clubs within the Greater Washington Metropolitan area. The objectives of the association are to promote amateur golf, maintain the true spirit of the game, provide services to the member clubs, and lend support to allied golf associations.

The Washington Metropolitan Amateur, started in 1914, is one of the oldest and most distinguished local competitions in the country. Among its early winners was four-time Walker Cupper Roland MacKenzie, a contemporary of Bobby Jones and a pupil of Fred McLeod, the 1908 US Open champion who served as the golf professional at Columbia Country for 60 years. At the other end of the time frame, Martin West III, another Columbia Country Club Walker Cupper and one of the country’s outstanding career amateurs of the last 30 years, has won the Metropolitan Amateur twice. In the time between these two historical periods stands one of the foremost achievements in the history of American amateur golf. During the 1946 – 1955 period, Robert W. Brownell won ten successive D.C. Amateurs (then the Metropolitan Amateur) – 50 straight matches – before finally yielding in extra holes at the 1956 Amateur semi-final to the young Perky Cullinane, who later would compete in at least one of every USGA Championship for which he was eligible. Brownell’s match play victory streak was thus 53 successive wins. Brownell’s business partner, the late Ralph Bogart, won the Amateur each of the three years 1939 through 1941. The three members of this remarkable triumvirate of Bogart – Brownell – West won a combined total of 54 Metropolitan Amateurs, Maryland Amateurs, Middle Atlantic Amateurs and Maryland Opens during the period 1936 – 1992. In recent years, Kirk Lombardi has won three Metropolitan Amateurs, two Maryland Amateurs and one Maryland Open while qualifying for numerous USGA championships.

The WMGA also plays an important role in promoting the game of golf among juniors in the Washington metropolitan area. The association currently conducts six junior boys tournaments each year. The Junior Open, recently re-named the Robert B. Riley Junior Open, was first contested in 1914 and is one of the oldest junior competitions in the United States. The Junior Open was followed by the Frank Emmet Schoolboy in the early 1930’s, the Bubby Worsham and Bobby Gorin Memorials in the 1950’s, the Dewey Ricketts Memorial in 1983, and, most recently, the Charley Ridgway Junior for 10 through 13s – in 2007. The groundwork for what is now the WMGA Junior Golf Program was established over the period 1927 – 1982 during which time the legendary Frank Emmet administered the Junior Golfers of Washington Program, with its theme of “Off the Streets and onto the Fairways.” Emmet was a charter member of the US Junior Amateur Championship Committee and played a key role in the inauguration of the US Junior Amateur Championship in 1948. Indeed, because of Emmet’s prominent role in American junior golf, two of the first ten Junior Championships were played in the Metropolitan Washington Area, in 1949 at Congressional Country Club and in 1957 at Manor Country Club. With unceasing dedication to the game, Emmet and his wife Irene traveled the country advising other golf organizations on the best methods of promoting junior golf.

When Mr. Emmet died in 1982, Irene Emmet was able to convince long-time volunteer Bob Riley to take over the administration of the Junior Golfers of Washington. At about this same time, Mr. Riley became the Executive Director of the newly organized Washington Metropolitan Golf Association, the successor to the original District of Columbia Golf Association. Later the Junior Golfers of Washington was moved under the auspices of the WMGA. Every junior golfer in the Washington, DC area knows about the junior events run by the WMGA. Indeed, these are known simply as “The Schoolboy,” “The Gorin,” “The Worsham,” “The Ricketts,” “The Riley” and now “The Ridgway.” As of the end of 2007, the combined competition years of these six events reached 292.

The Washington Metropolitan Golf Association also takes pride in its administration of the WMGA/Frank Emmet Scholarship Program, which awards annual scholarships to college bound golfers with outstanding academic and citizenship records. The WMGA strives to maintain and encourage the high standards of competition and personal conduct that Frank Emmet established as the primary goals for the Junior Golfers of Washington.

The WMGA is recognized by and enjoys a close working relationship with the United States Golf Association. Indeed, the Association currently has four USGA Committee Members on its Board of Directors. The WMGA conducts qualifying rounds for the U.S. Open, the U.S. Amateur, and the U.S. Mid-Amateur. Additionally, the WMGA maintains the qualified personnel and equipment required for rating golf courses in accordance with USGA procedures. Indeed, the Washington Metropolitan Golf Association was one of the first golf associations in the nation to rate its member clubs under the innovative Slope Rating System established by the USGA in the 1980s.

Beginning in 2016 the WMGA will be partnering with the Links to Freedom Foundation at Fort Belvoir, Virginia and Joint Base Andrews, the First Tee of Washington, DC, and the Special Olympics of Maryland to assist those organizations in their missions.

In sum, the WMGA has played a key area role in the major areas of golf administration – conduct of competitions, handicap and Rules of golf education, junior golf, and course rating – as the organization has sought to represent the highest standards of the game for over 100 years. 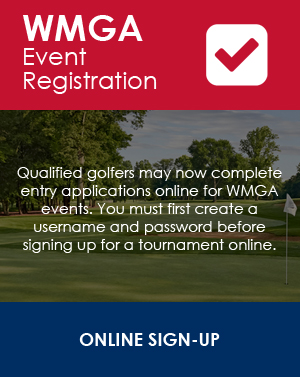