Oshrine, 21, a recent graduate of Duke University, who had a share of the first day’s low round, started the second round birdie-birdie and turned 2-under. Coming back, he birdied 12, doubled 14 and bogeyed 16, but settled down to par 17-18 to finish the round even par. This will be his fourth Amateur, and he had previously medaled in a U.S. Junior qualifier.

Rainey, 22, who just graduated from Charleston University, and 2 under after his first round, had four birdies, three bogeys on his second tour. It was highlighted by a finishing run of birdies at 16-17-18 that included a holed 50-yard bunker shot at the 16th..

Both Oshrine and Rainey plan on attending the PGA Tour qualifying school in the fall.

Giri, 19, an Arizona State junior, qualified on his third try, boosted by his low round of the summer in the second round.. He admitted he didn’t think he had a legitimate chance (to qualify) after his opening round, but by the middle of his second round, he felt if he could finish under par overall, he would have a chance.

With the playoff holes 10 and 18, Giri made it with a birdie at the starting hole. The rest would not shake out so easily. Keegan Boone (73-70), from Bethesda, became the first alternate on the second extra hole, getting in just ahead of what became a 90-minute weather delay. When play resumed, John Dustin (71-72), from Laurel, and Davis Lamb (74-69), from Potomac, went to the seventh extra hole before Dustin won with a par, A fifth player, Ji Soo Park, from Fairfax, Va., (74-69), failed to appear for the playoff. 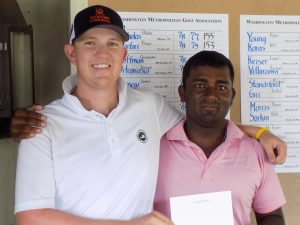 Vishal Giri (right) with his caddie Connor Messick. Connor Messick scored 72-65–137 at US Am qualifier at James River CC and missed advancing by 3 shots.

The U. S. Amateur Championship is being held at the Riviera C. C. in Pacific Palisades, CA.  The Bel-Air C. C. in nearby Los Angeles will co-host the 36 hole stroke play qualifying.  312 players will compete for the 72 match play spots.

All of the matches will be played at Riviera, also known as ‘Hogan’s Alley.’ 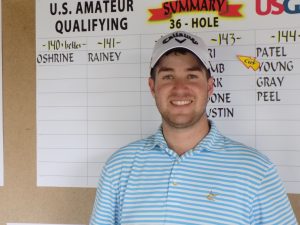