Defending champion Evan Santa, from Crofton Country Club, worked his way through two rounds, but it was rough going for some of the other seeded players, as Nos. 2 through 5 were shunted to the sidelines in a series of close matches during the first day of match play in the 98th Washington Metropolitan Golf
Association’s Amateur championship at Manor Country Club, August 4.

Among others advancing to the quarter-finals were Manor members Ben Warnqust and Bart Mease, and teenagers Evan Katz, from Bethesda CC; Blake Micholas from Congressional CC, and Pieter DeGroot, from TPC Potomac at Avenel. Also winning twice were Will Rosenfield, from the University of Maryland GC and Matthew Starobin, from Crofton CC and the U.S. Naval Academy GC.

No more than one hole separated Santa and Ian Hildebrand, from Purcellville, Va., until the 18th green. Santa, 1-down at the turn, used four back-nine birdies to turn the tide and when he won the 18th, the margin was 2 up.

Mease, who lost to Warnquist in an all-Manor Maryland State Amateur final in June, was never behind against Chris Baloga in a 3-and-2 victory. The home course is an advantage,” Mease said. “I played pretty well and made some long putts.” He went 2 up with birdies at Nos. 8 and 10, and as he added, “I got up and held on.” Baloga, who had had a relatively easy opening-round win, admitted to “some tired swings,” in the afternoon.

Katz, 19, a Landon School graduate headed to Duke University in the fall, was 1-under and 2-under and in his second outing, against Chris Navarro, from Crofton CC, he was not behind and wound up with a 1-up victory. Micholas, 19, watched Dan Walker, from the University of Maryland GC, win Nos. 10-11, then birdied 12 and — with a 45-foot “bomb,” birdied 14. He added one more, “I made some birdies in good spots,” and ended winning, 1 up.

DeGroot, 17, a Gonzaga High School junior, made 11 birdies in his two wins, but the second took awhile, as he used a birdie putt at 18 to force overtime against Adam Gray, 19, from Lakewood CC, and then holed a bunker shot at the third extra hole for the win. DeGroot had been 2 up after the ninth hole. Gray lamented a bunch of putts which were this close to going in, but unlike horseshoes, close gets one nothing.

The other two winners, Starobin, 20, a Naval Academy junior from Davidsonville, and Rosenfield, from Baltimore, will play each other in one quarter-final pairing, August 5.  Rosenfield surprised Erik Dulik, the medalist (67) and 2015 WMGA Amateur champion (he lost to eventual champions in the semi-finals the last two years) from Great Falls, Va., 2 and 1, and Starobin got back to even against Matthew Malits, 17, a DeMatha High School senior from Argyle CC, and another talented teenager, at 14 and won with birdies at 17-18.

In the first round, there were two overtime matches, as Starobin edged Manor member Dan Falls, in 19 holes, and Micholas went to the 19th in getting past Brendan Peel, a fifth seed.

Quarter-final and semi-final matches on August 5, will reduce the field to two finalists for a scheduled 36-hole final on August 6. 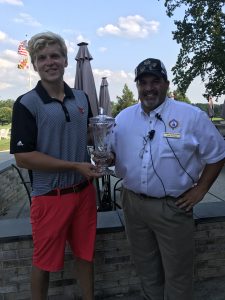