It was a Manor Country Club Day, as Bart Mease turned the tables on Ben Warnquist, rolling to a 5-and-3 victory in the 98th Washington Metropolitan Amateur championship at the Rockville course, August 6, Two months ago, Warnquist had beaten Mease for the Maryland State Amateur title, 7 and 6.

It appeared the Met final was headed in the same direction, as Mease, with some help from his opponent, led after the morning round, 5 up. However Warnquist
made a determined bid to get back into it, as he shot the third nine in 31 to be 2-down at the turn. This euphoria lasted only as long as it took him to hit a
shot out of bounds at No. 10 and when Mease birdied the par-3 11th, the gap went to 4 up.

“10 and 11 stopped the bleeding and I was able to get back on an even keel,” Mease, 40, said later. However, it all might not have been possible without the help of two friends, teaching professional Steve Bosdosh and Manor member and long-time buddy, Dan Falls.

“Steve [who served as his caddy for the final] kept me calm,”Mease explained. “He knows how crazy I get. Against Warnquist the first time [in the State final at Columbia CC], I wasted a lot of time worrying about what he was doing. Steve has worked with me to concentrate on my own game, to pay attention to what I’m doing. I have to play my game. He’s been an awesome help.” Steve added that, “Even the best players don’t trust their swing some times and I got him to swing with conviction. He’s really done a good job.”

Mease continued, “Dan convinced me to join here two years ago and I started playing more seriously. Steve helped me to learn my tendencies and how to compete under pressure.” Dan said he encouraged him because he knew how good a player he could be. “As kids, we played a lot together at Montgomery Village and I told him all he needed was to work on his game. To be really good, you need to drive it straight and be a good putter and I knew he could do those things.”

Warnquist, 24, admitted, “My game was kinda loose in the morning and I dug a hole that was too deep. I was able to get it together for the afternoon and I told myself my goal was to get back to 2 down after 9. I did that, but it’s hard to keep that pace. ” He was able to win 12 with a birdie, and par 13, but Mease birdied 14 and an errant drive at 15 led Warnquist to concede that hole and the match.

The 2018 Amateur will be played at Old South CC in Lothian, Md. 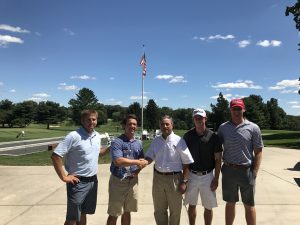