Pete DeTemple, from California, Md., won his first major championship with a 36-hole total of 143 in the 73rd Washington Metropolitan Seniors at wind-swept Chantilly National Golf & Country Club in Chantilly, Va., September 28.First-day leader Larry Martone, from Washington, D.C., birdied the 18th hole to get within a shot, finishing 70-74–144.

DeTemple, who has amassed a series of titles in Southern Maryland at Cedar Point Golf Club (7); Breton Bay G&CC (2 regular and is current Senior titleholder), and the Southern Maryland Seniors, opened with a 71 the first day, then challenged Martone early in the second round with birdies at the second and fifth holes.

He slipped on the back nine, with three bogeys to go with a chip-in birdie at the 11th, while Martone fell away after opening birdie-birdie He stayed within reach, however with a birdie at the 10th and seven pars ahead of his last birdie.

DeTemple, 55, in his first year of Seniors , missed the final four greens, the climax to a round that saw him reach only five greens in regulation. “The wind [15-20 mph] was a definite factor,” he said.

Martone, 59, who tied for fifth last year, not only started birdie-birdie in the final round, but had opened the first round with birdies at three of the first five holes. The two rounds were a marked improvement compared to some earlier efforts this season and he credited teacher Ted McKenzie. “All the difference,” Martone declared.

Bill Engel, from Alexandria, Va., won the Super Seniors (65-over) crown with 74-74–148, beating Dick Blackburn, Alexandria, Va., who finished 77-72–149. Engel, 70, was 2 over through four holes, then played the last 14 holes even with four birdies, four bogeys. Blackburn got within a shot of the lead with two back-nine birdies.

The stroke that turned out to be the winning one for Engel came on the 15th green. “Thirty feet straight down hill. It hit the cup dead center and fell in. If it had missed, it might have gone 12 feet past and I would have been looking at third instead of first.” Defending champion George Washburn, III, finished third, 77-73–150.

Engel also talked about the wind. “It played havoc with the ball and made it hard to judge distances.”

The winners each received a crystal award. We paid gift certificates to the top ten in the Senior division and the top six in the Super Senior division. Ties were broken by the USGA recommended method – last nine holes/last six/last three/last hole.

Gift certificates will be mailed out immediately to those who were unable to stick around for them. 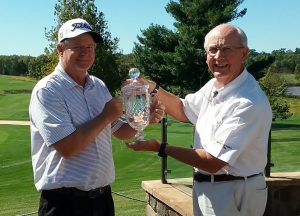 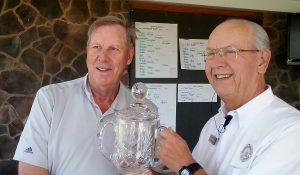