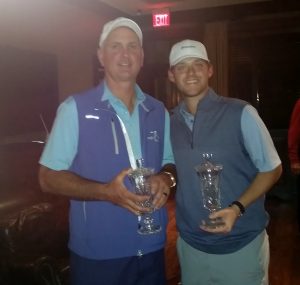 On a day that featured mild temperatures with intermittent rain showers, it also featured low scoring from a field of 84 teams.

The McCabe-Boone entry was followed by Manor CC members Brandon Cigna-Dan Falls at 64, and Ben Warnquist-Bart Mease at 65, where they were tied with a Congressional CC pairing of Ryan Tendall-Skip Clasper. Morning wave leader Mark Cusic-Kyle Carranza and Vance Welch-Michael Wah followed at 66.

Richard Holland-Steve Ford earned the Senior title with 34-32–66, edging past Skip Tendall-Ben Brundred, who had led briefly with a 67.

Barry Flaer and George Washburn, the 2015 Super Senior champions and losers in a playoff last year, returned to the winner’s circle with a 71, one stroke clear of Lynn Wessman-Don Jeanes.

Boone (4) and McCabe (3) combined for seven birdies in a bogey-free round. The 6,595-yard course was played to a par of 70. The highlight of the round came at the 420-yard 11th hole, as Boone was on the front edge of the green when McCabe struck an 8-iron shot to three feet.

His partner deprived him of a chance at birdie, however, when he holed the 50-foot putt.

Otherwise, it was pretty smooth sailing — no other birdie putts longer than 10-12 feet and no bogeys. Either player or both were on the green at every hole.

They thought they had a chance to win earlier in the season when they went 7 under through 16 holes in the Middle Atlantic Four-Ball event at the Country Club of Maryland, only to have play called because of thunderstorms. This was the second of three weather postponements for that event and all concerned are hopeful that there will be no problems when the MAGA will try again, for the fourth time, November 1 at the CC Maryland.

Winning team skins are – Hole No. 1 – an eagle 2 recorded by the team of Brandon Cigna/Dan Falls.  Brandon dropped his second with a 6 iron.  Their team fired a 64 to lead for ten minutes until Paul McCabe and Keegan Boone came in with the winning 63.  Hole No. 14 – an eagle 2 by the team of Tim Kane/James Farrah.  Jim drove it just off the green and chipped in for the 2.  Each player will receive $125.00 in an unmarked plain envelope.  All the other holes were birdied. 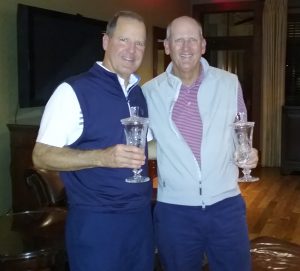 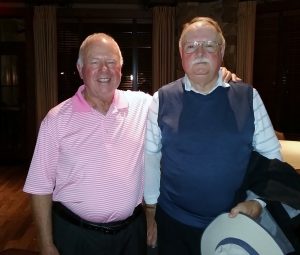