Charlie Winegardner put on an epic display of shot-making as he recorded rounds of 68-65, and romped to a 10-stroke victory in the 33rd annual Mid-Amateur championship of the Washington Metropolitan Golf Association, May 28, at Blue Mash Golf Course in Laytonsville, Md. The course was played at 6,690 yards to a par of 36-35–71.

The 133 and the 10-stroke margin are believed to be tournament records. The 65 equaled the score shot three times in the 2015 event at Argyle CC, a par-70 course. On that occasion Brian Simpson and Scott Shingler did it in the morning round, and Ryan McCarthy, in the afternoon round. Simpson slipped back, but held on to defeat McCarthy in a playoff. It has not been determined whether this stands as an 18-hole record.

Winegardner, from Lothian, Md., winner of last year’s WMGA Amateur, was in command all day in warm, sunny weather. He highlighted his morning tour with an eagle-3 at the par five 500-yard 12th, where he hit driver, wedge to six feet. Starting on the opening hole, he was 2-over after four holes, but turned even after birdies at Nos. 6 and 8. The eagle and a birdie at the 17th did the rest.

“It was a good, solid round. I drove it well to put me in good positions and, for the most part, didn’t make any mistakes,” he said. Tournament eligibility starts at age 25 and the champion, 28, was playing in it for the first time.

Herschel Smith, from Annapolis, posted an afternoon 70 that included four birdies for 143 and solo second place among the 55 players who returned two scores. Tyler Schmutz, from Brinklow, Md., followed at 71-73–144, including an eagle-3 at the 12th in the afternoon. Matt Kurtz, from Ellicott City, Md., rallied from 82 to 72 with a round that included an eagle-3 at the 535-yard fifth hole, and Travis Russell, from Washington, also staged a fine comeback, putting up a 70 (with birdies at Nos. 8-9 after starting at 10) after an opening 81.

Notes: Schmutz and Thomas Sutterfield, Bryans Road, Md., each had five birdies in their morning rounds. . .Aside from Winegardner, Schmutz, at 71, was the only other player at par or better in the morning. . .In the afternoon, Smith and Russell shot 70 and Nathan Shevchik, Fairfax, Va., and Joe Scheffres, North Potomac, Md., the defending champion, had 71’s. 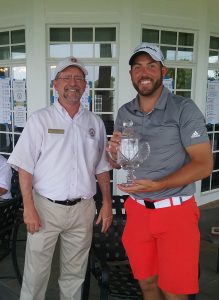