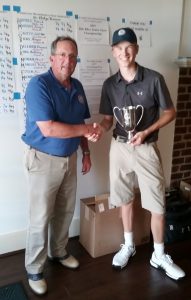 Addison Wells with the Executive Director

Addison Wells, a recent graduate of Severna Park HS and member at Chartwell G & CC, captured the 97th Bob Riley Junior Open at the Belle Haven CC with a two day, even par total of 144.  The first day, Addison had 6 birdies, 4 bogeys , and double bogey totaling an even par 72.  On the second day, he checked off 10 straight pars, birdied the par 4 11th, bogeyed the par 4 13th, birdied the par 4 15th (for the second day), bogeyed the 210 yard par 3 17th, and capped his round off with a par 4 on the last, clinching the title by one stroke over Chase Nevins, Great Falls, Va. and Trump National – DC, who was playing in the 14-15 age division. Chase added a 73 to his day one total of 72 to take an early lead for the over-all prize. It wasn’t until Wells finished up in the last group that Nevins was awarded the 1st place trophy for the 14-15 age division in lieu of the overall prize (the 14-15 and 16-18 age groups play the course at the same yardage and the winner can come from either division).

Round one leader, Dylan Allen, from France and headed to DeMatha HS this coming fall, never got going, playing holes 4 – 7 in 22 strokes (+6).  In round one he played the same stretch in 12 strokes (-4) and ended the day with a 70 (-2).  It was an uncharacteristic day for Allen, who recently finished 4th in the Frank Emmet Schoolboy.

Harrison Silva, Baldwin, Maryland was at 71 (-1) and in second after round 1.  A back nine he would rather forget doomed his chances.

Three players ended up at 148 (+4) – Will Mullally, Nicholas Amateau, and Dugan McCabe.  A play-off followed to determine the 16  -18 Age Division winner and Mullally won on the third play-off hole.  Last year he ended the tournament in the same position, finishing behind over-all winner Patrick McCarthy.

The 13 Under age division was won by Jack Stamato, another Chartwell G & CC player.  Jack shot 77-77–154 to capture the crown for the younger set.

The temperature was in the high 90’s and the heat index over 100, which took its toll on many of the players.  “The heat really got me” was a common refrain.  To help ease the suffering, the club put out containers of chilled. damp towels for the players and water everywhere.  Belle Haven CC continues to be a generous host of this event. 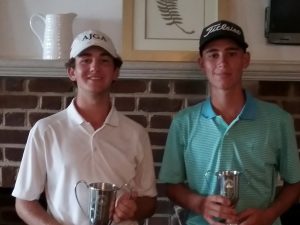 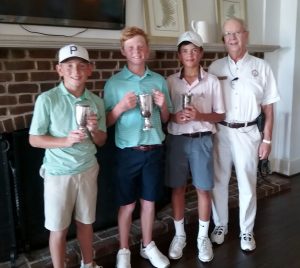