Nicholas Infanti, from Clarksburg, thwarted just about every challenge Will Halamandaris made and the result was a 3-and-2 victory for the 101st Washington Metropolitan Amateur championship at Norbeck Country Club, August 4.

Infanti, 22, a North Florida University senior, birdied the fifth hole in the morning round of their scheduled 36-hole pairing and was never down in he match. In the process, he made eight birdies including a 40-foot shot after a free drop from an embedded lie in the grass facing of a bunker on the sixth in the afternoon, and a 75-foot two-putt on eight.

Halamandaris, 20, a Lafayette College senior, made his best bid late in the first 18, birdieing the last three holes, winning two of them to slice his deficit to 3-down, and it went to 2-down on the first afternoon hole when Infanti conceded a birdie. However, the leader regained some steam moments later when he dropped a 30-foot putt at the second and followed with a winning par at the third to get to 4 up.

Halamandaris birdied the fourth, but his opponent came through with that hole out  at the sixth hole, added a birdie at the eighth and turned for the final nine 4 up. They tied 10-11, marking the first time since the opening two holes in the morning they had gone two holes without a change.

It didn’t last long, as Halamandaris won the 12th with par and birdied 13 to climb back to 2-down. This turned out to be his final hurrah. Infanti won 14, hitting from below a greenside bunker to the green and two-putting, while Halandaris found the bunker on the 325-yard hole, his ball just a foot from the wood slat bunker face, was long with his second when the ball bounded off the slats, and ended with a bogey.

With Infanti now 3-up, the two halved the last two, as the trailer finally ran out of holes after keeping things going as best he could.

“I didn’t putt well the first three rounds, but I turned it around Saturday afternoon and that gave me a lot of confidence for today,” Infanti declared. “I made a couple of mistakes, but missed where I could get away with it.” He hit 13 of the 16 afternoon greens and finished with 24 putts.

Both players displayed wonderful ball-striking with few errors.  Halamandaris, the current Patriot League individual champion, could only shake his head about putts that refused to fall — he head 30 putts in the morning and 27 in the afternoon, with a lot of narrow misses.

After shooting a 74 in the stroke play qualifier on Thursday, Infanti survived a 10 for 7 play-off, to gain the match play field with the 30 seed.

The event was sponsored and conducted by the Washington Metropolitan Golf Association. 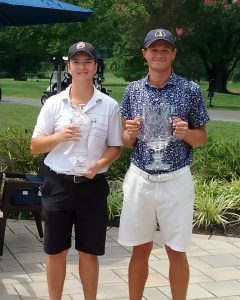