Don was recognized for his unwavering support of amateur and junior golf throughout the region and his efforts in the field of Rules of Golf education.  Don is often the first volunteer to show up and the last to leave.  His expertise has helped elevate the reputation of the WMGA as one of the top golf associations in the nation, especially in the field of Rules of Golf administration.  His years of traipsing around farm fields and agricultural research centers prepared him well for hiking over golf courses.

Don spent  40 years with the U.S. Department of Agriculture’s Agricultural Research Service with a focus on technologies related to improving soil management and crop production.

From 1999 until his retirement in 2006, Erbach was the ARS national program leader for engineering and energy. During that time, he was the team leader of the agency’s Bioenergy and Energy Alternatives national research program and was a co-leader of the crop production national program. Since retiring, Erbach has presented at conferences in the U.S., Canada, Ireland, France and Slovakia on the need for and the potential to replace gasoline and diesel fuel with biofuels.

Don is a member of the American Society of Agricultural and Biological Engineers. 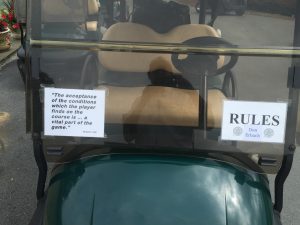