Brandon Cigna, Arlington, VA, captured the 31st Metropolitan Mid-Amateur Championship at the Old South CC in Lothian, Maryland today. Light to moderate morning showers gave way around noon to cool, overcast conditions with very little wind.  Thick rough, made more difficult by the wet conditions, put a premium on accuracy off the tee, as the rain was not sufficient to soften the firm putting surfaces.  Cigna’s opening three under 69 gave him a two shot lead over Andrew Kolarik, Cockeysville, MD, and Mark Cusic, California, MD, and a three shot lead over Dan Walker, North Bethesda, MD.  The field, while not large in size, was deep in quality, and featured most of the A-Team from the University of Maryland GC, including 2016 Champion Bryan Koslosky, and strong contingent from Breton Bay G & CC.  Koslosky never could get on track in the morning rain, opening with a disheartening 84.  He bounced back with a two under 70 for a measure of redemption, as did a number of other players who struggled in the AM.

Cigna held on in the afternoon with a plus two 73, to gain a two shot victory of Kolarik, also at 73, whose PM front nine 38 left him too much ground to make up.  Tony Bostic, Arlington, VA., matched Cigna’s low round of the day 69 in the afternoon which jumped him into third.  Doug Gentilcore, capped his morning 76 with a 70 landing him in solo fourth. The golf course featured a varied set-up, with some hole yardages changed for the afternoon round, with overall yardage for both a hair under 6,600 yards.  WMGA/MAGA meteorologist Josh Boden hit a home run with his weather forecast, predicting an end to most of the rain by noon.  The end of the rain brought an end to the misery of some.  The average score was a full two shots better in the PM.

The WMGA thanks all the competitors for their participation and support.  Well done. 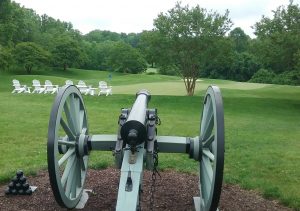