Elliott Haas, a rising junior at nearby Urbana High School, matched par with
36-36–72 for the 6,695-yard course in Frederick county, trailed by Kyle Balow,
Quince Orchard High School, 36-37–73. Forty five players returned a score, and
will play a second round, June 22. At that point, the low 25 scorers and those
within 10 shots of the lead will advance to a final round, June 23.

Katz, 18, a Washington resident headed for Duke University in the fall, had
four birdies (all but one on putts inside of 10 feet), three bogeys (all the
result of missed greens). He was in position for another birdie when he reached
the green of the par-5 ninth in two, then three-putted for par.

Last year, Katz was a runner-up in the Maryland State Juniors and two years ago,

Where Haas’ round was fairly routine, Balow had only four pars on his card, as he was

good with seven birdies, but not so good with six bogeys and a double-bogey.

Pieter DeGroot, from Gonzaga, a former U.S. Junior qualifying medalist and winner of

birdies to get to 74. He was joined there by Keegan Shreves, Georgetown Prep, who

For the first time, a “School” team trophy using the two lowest scorers will be awarded.

combining for 148, followed by Quince Orchard, with Kyle and Ryan Balow, 149. 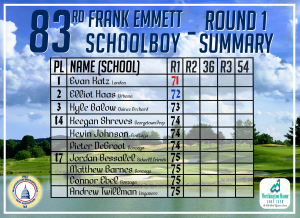