Keegan Shreves captured the 16-18 age division crown today when he defeated Pieter DeGroot by a margin of 3 & 2 in the delayed final.  The match was scheduled for this past Friday afternoon but a lengthy suspension of play due to lightning and heavy rain pushed the morning finish out past 1:30 PM.  With more severe weather on tap, and forecast to last into the next morning, the decision was made to postpone the final until today.  Under a brilliant blue sky, the final match started at 7:35 AM. 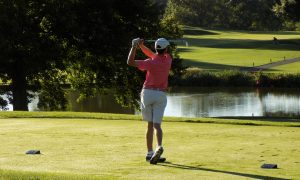 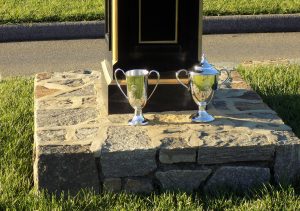 The first was halved with pars and the players traded the next two, Shreves parring two for a win and DeGroot birdieing three to Shreves bogey keeping them all square through three.  Four and five were parred by both players.  DeGroot was unable to save par on six when he missed the green short and left and Shreves chipped up for par from just off the back to go 1-up.  They followed with pars on seven and bogeys by both on eight, after each drove into the right side fairway bunker.  DeGroot’s second on nine found the deep bunker on the right corner of the green and he just missed saving par.  Shreves was safely on the front for a two putt and 2up lead after nine. 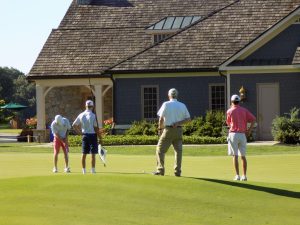 A birdie on ten by DeGroot to Shreves par narrowed the margin back to one.  The next two holes would shift the momentum to Shreves for good.  He responded to DeGroot’s birdie with one of his own on eleven to send the margin back to 2-up.  DeGroot found the bunker on twelve, short and right, and again narrowly missed saving par, dropping him to 3-down. Both parred the par three thirteenth, with Shreves managing a nifty up and down from well short of the green with a putt across the damp approach.  Bogeys on fourteen brought the match to the fifteenth and what would turn out to be the pivotal hole. 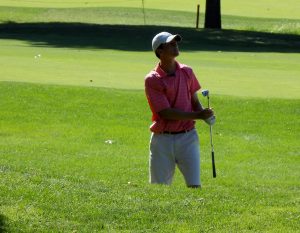 Shreves right on 15 pitches out of trouble 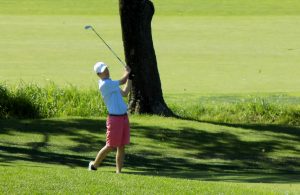 DeGroot lays up on 15 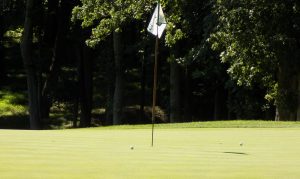 Third shots on 15 – both birdie

Shreves drove right, into the trees and on the inside bank of a fairway bunker.  DeGroot was down the left side in the rough, too far to reach in two, prompting a wise lay-up to about 110 yards.  Shreves did not have much and pitched out to about 135 yards.  His third came to rest five feet left and under the hole.  DeGroot responded with one of his own, pitching to thirty inches just left of the hole, a tricky putt remaining.  Shreves, who wastes no time on the golf course, confidently rolled in his five footer into the middle of the hole for birdie.  DeGroot, just as confident, did the same, knowing that a miss would end the match.  With Shreves standing dormie on the 192 yard sixteenth, both players came up about half a club short of the hole and faced about forty feet each.  Shreves was first to putt and left his about three feet just past and right of the hole.  DeGroot gave the hole a scare and left a tap in which was conceded.  Again, not wasting much time, Shreves calmly rolled his in for the match winner, 3-up with two to play.

Both players will be high school juniors in the fall, Keegan at Georgetown Prep in North Bethesda and Pieter at Gonzaga College High School, in Washington, DC. This is not going to be the last time that these two players meet to decide a match or championship.  The players are good friends and share a mutual respect for each other’s games.  They looked like to veterans walking together down the fairways trading conversation and pleasantries while battling for the championship.  Our congratulations to both players. 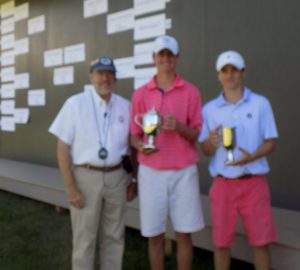 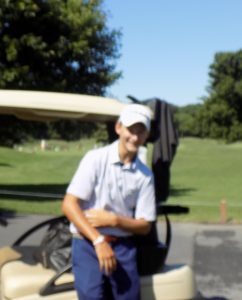