Marshall Meisel was never behind and three back-nine birdies helped him to a 4-and-3 victory over Connor Ebel in the championship pairing in the 14-15 age group of the Bobby Gorin Memorial tournament at Woodmont Country Club in Rockville, Agust 12. The event had been scheduled originally for July 28, but rain forced a postponement.

Meisel, from Chevy Chase, 14, and an incoming freshman at Gonzaga High School, turned the front nine of the North Course in par 36 and led 1 up. Birdies at the 10th and 13th holes put him 3 up, and he sealed the decision with a conceded birdie at the 15th. Ebel sent his second shot into the woods, came out short of the green in three, pitched to 12 feet and missed his par putt. Meisel was on the green of the 534-yard hole in three.

Ebel, 15, also from Chevy Chase, and a rising Gonzaga sophomore, lost the opening hole to a par, squared it at the fourth with an eight-foot birdie putt, then made one of the match’s several several highlight-reel shots — a 30-foot putt for a birdie that matched a birdie from Meisel. The latter went 1 up with a winning par at the seventh. After halving Nos. 8-9, Meisel would play the six holes on the back nine in 1 under and Ebel, 3 over.

Meisel had a couple of superb shots. At the seventh, both players were in the front bunker looking at getting out to a hole location that was some 10-12 feet from the back edge of a green that sloped away from them. Ebel ran his shot well by the hole, but Meisel landed his shot just over the edge of the bunker and the ball ran down and stopped a foot from the cup. The other was a 30-foot pitch-in from the apron in front of the 13th green.

Meisel, who did not go beyond the 16th green in four matches, was the steadier of the two finalists. His only blips were two bogeys (each for a half) sandwiched around a birdie (at the 13th) that sent him 3 up. Ebel had trouble keeping his tee shots in the fairways, but stayed in contention with some marvelous recovery shots.

For the tournament, Meisel, the 14-15 age-group winner in the Bob Riley Junior, did not go past the 16th green. Ebel went to the 17th and 18th holes in winning quarter-final and semi-final matches, respectively. 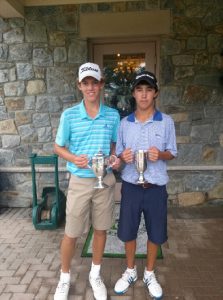 In earlier age-group finals, Keegan Shreves defeated Pieter DeGroot, 3 and 2, in the 16-18 class, and J.B. Vito defeated Corey Minkoff in 21 holes in the 13-under class.