Holland, from Columbia CC, and current president of the Middle Atlantic Golf Association,
had five of the team’s six birdies in a bogey-free round, while Ford, from Caves Valley GC,
and a past president of the MAGA, birdied the 10th and picked up his teammate on several
other occasions. As is often the case in this format, one player is often inside of his
partner on the green, but never gets to putt after his partner holes a longer one.

On the leaderboard, Ken Hanson-Ron Clatterback placed second with 68, followed
by three at 69. This division of the three age-group program (55-64) had 19 team
entries and played the par-71 course at 6,236 yards.

The Annapolis and Old South CC entry of Ben Ricker and Joe Rice checked in late
in the afternoon of a mild, sunny day, and posted 34-33–67 to jump over two
teams who had shared the early lead at 68 and capture the Regular division (up
to 54). Both were familiar with the course, dating back to their Junior
appearances in the annual Bobby Bowers event, and while this was their first
time as a team, they played steady with just one bogey. On the back, Ricker, 39,
birdied 14; Rice, 28, and still limited by a broken wrist from a year ago,
birdied 15 and then had putts from five feet and eight feet in converting
birdies at the 17th and 18th.

Ricker also kept them in the hunt when he got up-and-down from a greenside
bunker at the 16th, holing a five-footer. “The greens were great and if you messed
up a bunker shot, it was on you, because they were perfect.”

There were 13 team entries in the Regular division and they played the course at
6,568 yards.

Joe Records, 71, from Lutherville, Md., and Baltimore CC, made the most of only his
second tournament of the year. He and Jim Castagna, 67, from Sandy Spring, Md., and
Manor CC, shot 70 to tie with George Washburn, Frederick, Md., and Barry Fleur,
Adamstown, Md., their playing companions for the regulation round of the Super Senior
competition. Both teams has strong backgrounds in winning Senior and Super Senior
4-Ball tournaments.

In the playoff, at the par-4 first hole, Records was over the green in two, pitched
to five feet and dropped the putt to win it after none of the other three could make par.

In regulation, Castagna had three back-nine birdies, highlighted by a 10-foot birdie
putt at the 18th, but thought they had come up a stroke short. “I miscalculated,” he said.
“George made a birdie for a tie and then birdied 17 with a 20-footer to go up by one.
I thought it was two, but, obviously liked the outcome.”

There were 10 team entries in this class and they played the course at 5,942 yards. 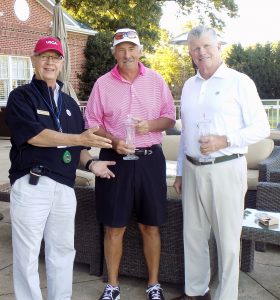 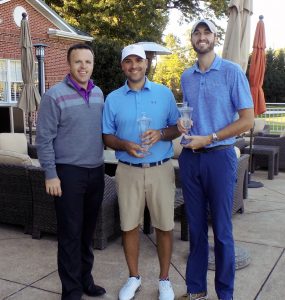