The WMGA 2017 Junior Golfer of the Year is Pieter DeGroot (16 years old – Potomac, Maryland).  Pieter is a junior at the Gonzaga College High School in Washington, DC and plays out of the TPC Potomac at Avenel Farm in Potomac, Maryland.

Several criteria are measured when selecting the Junior Golfer of the Year.  Competitive record, support of the junior program, and sportsmanship and character are the primary factors weighed in determining the selection of the honoree.  The example set by the older players has been an important part of the success of the WMGA junior program. Year after year our players ‘graduate’ from the program and are followed by other young players who achieve and maintain the high standards set for them by the group before.   The WMGA is fortunate to have had, for generations now, young people who represent their families, schools, clubs, and the Association in an outstanding manner at the local, state, regional, and national levels.  The annual honoree carries forward the traditions of the WMGA junior program.

To be considered a player must play in a minimum of two WMGA junior championships.

Pieter tied for 6th in the US Junior Amateur qualifier at the USNA GC, was third in the Frank Emmet Schoolboy at Worthington manor GC, made the second round of match play at the WMGA Metropolitan Amateur played at Manor CC, qualified for the fourth seed in the Bobby Gorin Memorial at Woodmont CC -North Course and finished runner-up (to Keegan Shreeves), finished 8th in the PGA Junior qualifier at USNA GC, was 7th in the Maryland Junior Amateur at Norbeck CC, 17th place in US Amateur qualifier at Argyle CC, 10th place in the MAPGA Denny McCarthy tournament at Argyle, played on the MAPGA Capital Cup Team, and finished 9th at the Middle Atlantic Amateur Championship at Laurel Hill GC in September.  Pieter will graduate high school in 2019.

The WMGA is extremely proud of Pieter and all the young men who support our junior championships and other local and regional tournaments.  Pieter joins recent honorees Matt Barnes (2016), and Ryan Kelly and Tyler Koch (2015) in carrying forward the proud traditions of the WMGA. 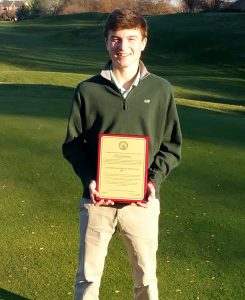 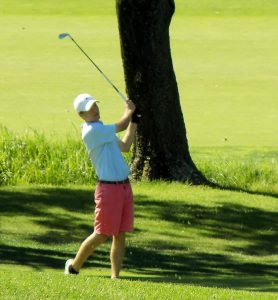