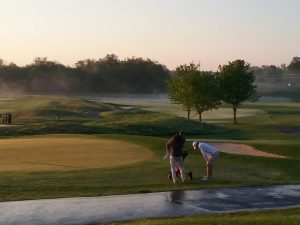 An hour before the first time

Three members of the Liberty University team were among five golfers advancing out of a U.S. Open Local Qualifier at Blue Mash Golf Course in Gaithersburg, May 1. One of them, Gabriel Lench, carded a 3-under-par 67 to share medal-winning honors with Ben Warnquist.

From a starting field of 86, the top five finishers over a par 36-34–70 course that was played at 6,861 yards, scored in the 60’s and two 70’s played off to sort out the available alternates’ positions. The area sectional qualifier will be held June 4 at Woodmont Country Club in Rockville.

Warnquist, from Olney and Manor CC, a medalist two years ago, hit 14 greens and highlighted his round by stringing together three birdies to turn the front nine in 3-under 33, then added two birdies, two bogeys for a par-34 on the back. He finished with a birdie at the 562-yard 18th, hitting driver-4-iron and using two putts.

The rest was pretty much Liberty. In addition to Lench, the Lynchburg (Va.) school sent out Mickey Demorat, 68, and Mitchell Klooz, 69. The other qualifier was Jeffrey Long, 68. Peter Knade, from Easton, made a bogey-5 at the first playoff hole (No. 10) to become first alternate after Junhak Lee, competing unattached, put his second shot in a hazard and eventually ended with a 7.

Lench, 21, a junior from Lake Mary, Fla., a second alternate two years ago, started on No. 10 and had a birdie and a 3-putt bogey on that nine, then put up three birdies on the front. The best of them was at the 580-yard fifth, where he laid up to 75 yards, then hit a wedge shot to a foot. He said, though, that the key to the round were two up-and-down par saves (Nos. 2-3), as he hit his approach to four feet, then went right rough, way left, then another wedge shot to 25 feet, and holed it.

Demorat, a 22-year-old senior from Merritt Island, Fla., produced five birdies and three bogeys. Three of the birds (and two of the bogeys) came on the back, where he sank putts from 35 feet (uphill at 11), 5 feet at 14, and a 30-footer at 17. This will be his third straight sectional as he trailed Warnquist by one (68) at Worthington Manor two years ago and tied for third at Northwest (72) last year.

Klooz, also 22, and a senior from Laurel, Neb., had four birdies, three bogeys. The bunch included a 2-putt at the fifth for birdie; a shot to a foot at the 177-yard 13th and a 3-putt at the 17th, this last a fairly common occurrence during the warm, sunny day.

Long, 31, from Ashburn, Va, who works at the host club, said he had probably played in about a dozen of these things and this is the first time he has been able to advance. He ended with five birdies (one 2-putt and the rest from inside 10 feet), two bogeys (a 3-putt and a missed green).

Klooz and Knade, a University of Maryland student, played in the afternoon and by winding up in the top seven, eliminated nine players at 71 from consideration.

Regional play for the NCAA golf championship will be this weekend, with Liberty qualifying as a team for the Raleigh (N.C.) site, and Knade and Maryland teammate David Kocher, a senior from Charlotte, N.C., going as individuals to Columbus, Ohio. 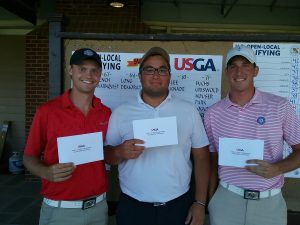