Hobbit’s Glen Golf Club won three of four matches and split the other one to
earn the championship of the annual Washington Metropolitan Golf Association’s
Senior Team Matches with a 9-3 victory over Washington Golf & CC, May 12. The

Maryland club, which last won two years ago, prevailed at both sites by the same 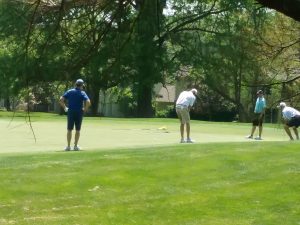 Washington Golf was a losing finalist for the second straight year (Congressional
won a year ago, 8 1/2 – 3 1/2). The Virginia entry returned six players from that team,

while Hobbit’s Glen also sent out six from its last title-winning team.

and Kevin Allis-Craig Ostrom stopped Steve Fry-Tom Offutt, 2 1/2 – 1/2. At Hobbit’s
Glen, Mike Panos-Doug Wilson split with Bill Stout-Richard Barrazzoto, 1 1/2 – 1
1/2, and Ben Clements-Fran Lynch defeated Mike Brown-Vance Redmond, 3-0. Egge
and Allis did not play in the championship match in 2016 and O’Neill and Stout
did not play in last year’s final. 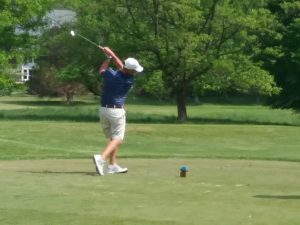 Richard Barrazzoto – Wash GCC – pipes it on 16 at Hobbits

This time, in Arlington, Va., Egge birdied Nos. 8-9 to get his side 5-up, but
the home team sliced into the deficit a bit on the back before the opposition
closed it out, 2 up. The other pairing saw Ostrom birdie the ninth for a 1-up
win on that nine and the two sides halved the back. 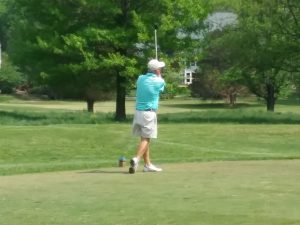 In Columbia, Barrazzotto-Stout won the front, 1 up, with a par at the par-3
eighth.  Panos-Wilson turned things around and won the 17th when Doug Wilson

(one conceded). “That’s as good iron play as I’ve had in a long time,” he said later.

Clements-Lynch teamed well, finishing each nine 2-up to create a sweep of their points. 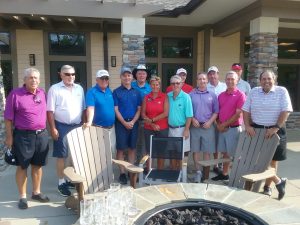 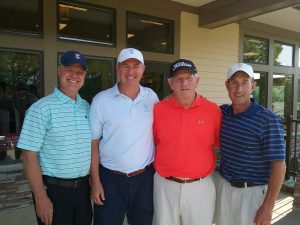 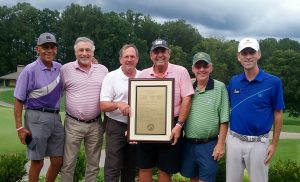