Coley Hunter, a senior at Gonzaga College High School, retained his lead with the help of three back-nine birdies, but the margin is shrinking in the 85th Frank Emmet Schoolboy championship under way at Worthington Manor Golf Club.

With the field cut approximately in half, 27 players at 168 or better will play the final round on June 22.

One title was decided for the first time, as the newly installed Pre-Schoolboy division for players who have not yet entered high school, had 14 starters complete two rounds. Esteban Knorr, from Arlington, Va., who had started with 79 but was only two players and four shots behind, carded a 76 for a 36-hole total of 155 and a 1-stroke victory over Alexander Maloy, Potomac, Md., 77-79–156. 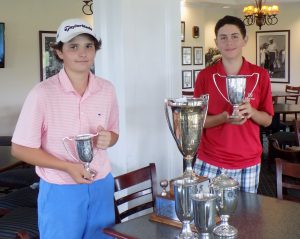 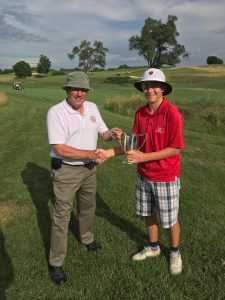 Hunter, who admitted to playing, “a little better,” had five birdies, including a chip-in and two 15-foot putts, to go with three bogeys, the result of two missed greens and a 3-putt, in holding his lead. DeGroot, who said he played, “more solid,” hit 16 greens and ended with five birdies, two bogeys.

The two 17-year-olds were in the last starting group and thus avoided all but the tail end of a morning rain storm that blew through and made a mess of a bunch of scorecards. Among the casualties was one player who played the two par’-5’s on the front in 11 (No. 5) and 10 (No. 9)strokes, respectively. No. 5, 533 yards long, which played the toughest, extracted five 7’s, four 8’s, a 9, a 10, two 11’s, and a 12, among others numbers. Joe Hemsley, from Georgetown Prep, was at the other end of the spectrum, as he scored the hole’s only birdie, hitting his 7-iron approach shot to two feet.

There were also some fine recoveries — either from the first to second round or from front nine to back nine. Graham Kalan, from Bishop Ireton, showed the most improvement, going from 90 to 75, followed by Carlo Pizzano, from Saint Anselms Abbey School, from 84 to 72, and Nick Politis, Quince Orchard High School, 88 to 78. In the second round, Addison Wells, from Severna Park High School, showed the difference the rain made, as he had 50 on the front nine, to 39 on the back, finishing with five successive pars.

Round two scores are ⇒ HERE

The start times and results on our scoring link have been fixed. Go ⇒ HERE

Stay tuned to our website for updates.  Prepare for lousy weather and bring rain gear and an umbrella.

Good luck to all tomorrow!