Pieter DeGroot, a Gonzaga College High School senior, added another trophy to a rapidly growing collection June 22 when he won the 85th Frank Emmet Schoolboy championship with a closing round of par-72 for a 54-hole total of 215 at rainy Worthington Manor Golf Club in Urbana, Md.

DeGroot, 17, began the final round two strokes behind leader Coley Hunter, another 17-year-old Gonzaga senior, and five in front of Matthew Malits, from DeMatha High School. Hunter slipped back with 78-219, where he was tied for second place by Malits, who rallied on the back nine to finish with 71-219.

Hunter, from Rockville, Md., who doubled the third hole to drop into a tie, lost his lead when DeGroot got up-and-down at the par-5 fifth with a 15-foot birdie putt, then regained a tie with a birdie at the seventh. When DeGroot capped another up-and-down with an eight-foot putt at the par-5 ninth, he was able to turn one stroke ahead and did not relinquish the lead the rest of the way. He reached 15 greens in regulation, with two back-nine bogeys, and Hunter fell away, as he gave back five shots in posting 41 for his last nine.

DeGroot’s resume had previously included U.S. Junior medalist in 2016 at the Naval Academy, a runaway overall and 14-15 titles later that summer in the Dewey Ricketts at Manor CC, and last year, a third in his Schoolboy debut, and a finalist in the Gorin Memorial tournament at Woodmont CC.

Malits, from Silver Spring, Md., dropped four shots in the first six holes, but got half of them back with birds at the seventh and eighth holes. Coming home, he birdied the 10th (80-yard wedge shot to three feet), the par-5 13th, (180-yard 7-iron shot to eight feet), and the par-5 18th (chipped in) to claim a piece of second place.

Jake Griffin, 15, a Walter Johnson High School sophomore from Kensington, Md., produced the low round of the tournament, 34-34–68, with five birdies (including the opening two holes) and one bogey. He hit most of the fairways and greens and ended with 28 putts. “I was putting really well,” he declared. He finished in a tie for sixth at 230.

The event is conducted by the Washington Metropolitan Golf Association. 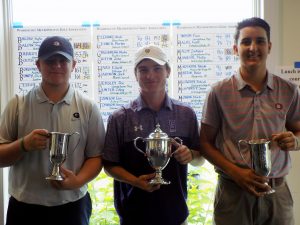