Logan Lowe, a George Washington University senior, carded a par-72 second round for a 36-hole total of 139, and won the medal in U.S. Amateur sectional qualifying at the Country Club at Woodmore in Mitchellville, July 17.

With five places and two alternate spots available from 122 starters on July 16, Lowe, 20, from Grass Valley, Calif., was followed by Matt Bassler, Catonsville, Md., and Connor Messick, Herndon, Va., at 142; Toks Pedro, from Bowie, 143, and, out of a three-way playoff at 144, Kevin Scherr, Nazareth, Pa. Mac Webster, of Baltimore, and Carson Bacha, York, Pa., became the alternates.

Lowe turned 1-under, then bogeyed the 10th and the par-3 14th. “At 14, he said, “I hit in the water but got up-and-down with a 12-foot putt for bogey and that kind of got me going.” He finished even with a birdie at the 18th, where he hit a 20-yard pitch shot over a bunker to four feet at the par-5 finishing test.

The Californian has been travelling for tournaments this summer and this site fit into his schedule. This will be his second Amateur. Last year, he tied for third in the qualifying stage (stroke play), then lost in the first round.

Bassler, who will be making his third Amateur appearance, was 2-over through the first four holes, but got one back at the sixth and two more at the 565-yard eighth where he had a 40-yard third shot and holed it, the ball landing on the green and running into the cup. “That changed everything for me,” he said. He went on to birdie Nos. 10-11, then gave both back to finish 35-36.

Pedro, 22, who just graduated from Rutgers University, had some “peaks and valleys.” A peak was definitely an eagle-3 at the eighth, where he struck a 171-yard 7-iron shot to 10 feet, but he more than wiped that out with a triple-bogey at the par-3 12th. “After that, I calmed down, made birdie at 13, and was solid the rest of the way, winding up with a birdie from eight feet at the 18th,” he explained. He ended 69-74. 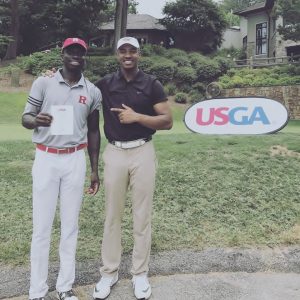 In the playoff, Scherr won with pars at 10 and 18, Two other 144’s, Johnson and Benton Weinberg, Potomac, Md., did not appear for the playoff.

The championship will be played Aug. 13-19 at Pebble Beach, Calif.

Side Note – the play-off finished about twenty-five minutes ahead of the automatic lightning detection alarm being triggered by an approaching storm. Shortly after the sirens sounded, wind and rain lashed the golf course from end to end.