The preliminary rounds of the WMGA A-Team matches concluded Sunday, again with interruptions from the weather.

Division 1 was captured by number one seed Columbia CC as the beat CC at Woodmore.

Division 2 was won by another power house team, Beaver Creek CC when they knocked off the River Creek Club, a developing contender.

Division 3 went to the University of Maryland GC with a very wet win over Augustine GC, playing in just their second year in the matches.

Division 5 has the GC at South River the victor after squeaking by a tough Chantilly National G & CC team.

Division 7 has Bethesda CC as its winner even after losing a play-off after halving with the Piedmont club today.  With three teams at 2-1, the final tie breaker goes to most points between the three and Bethesda had accumulated 31.  This was probably the hardest fought division in the preliminaries, with all the matches between the three at 2-1 very close.

Division 8 goes to Crofton CC which has a long, storied history in WMGA and MSGA team matches.  Can they relive glory from years past?  They were neck and neck in points with a very good TPC at Avenel team and the match today decided the outcome. 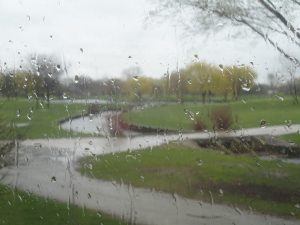