Charlie Winegardner faced a two-edged sword going into the 100th Amateur championship of the Washington Metropolitan Golf Association at Old South Country Club in Lothian, Md. With the tournament at his home course, he loomed as one of the favorites and, of course, drew the encouragement of fellow club members.  At the same time, he pointed out, “When you play a course every day, it’s tough to be competitive.”

As it turned out,  the current Old South club champion was competitive enough to put away five opponents in three days, with a 4-and-3 victory over Chris Navarro, from nearby Davidsonville,  bringing in the coveted title. Weather woes the first two days forced a change in the normal schedule, as the semi-finals and final, each scheduled for 18 holes, marked the last day.

Winegardner put himself in trouble on the final’s first hole when he hit his tee shot out of bounds. As would be the case on four occasions, he bounced back to win the next hole. . .and the next. . . to take a 1-up lead he would not relinquish.

Unfortunately, Navarro encountered a handicap at the fifth tee when his driver broke on his tee shot. The rules permit a substitution if broken in the normal course of play, but he did not have one available and chose to go the rest of the way using a hybrid or a 2-iron.

Asked if it was similar to having his hands tied, he said, “Not really, but it was tough.” After the first, the only holes he won were Nos. 8, 10, and 14. “Charlie’s a good player and tough on his own course.” And, as if the long-hitting Winegardner didn’t already have an advantage off the tee, now he was hitting it 75-100 yards past his foe and leaving himself in position for his next shot.

Looking back, the champion said the best part of his game was ball-striking, with his putting “a little shaky.” Still, like a lot of his shots that were there when he needed them, he was overall sharp in recording six birdies, four of them on the front nine where he fashioned a 4-up lead.

In the morning semifinals, in a match worthy of a final (and better than some), Winegardner used an eagle-3 at the 549-yard 18th to get past a determined Justin Feldman, 1 up. For the round, the winner had an eagle and five birdies, while Feldman had six birdies. No lead was ever more than 2 up, and Feldman stayed in contention with wins (to go all square) at the 14th and 17th. Feldman reached 18 in two and two-putted from 50 feet, but a 3 still beats a 4, no matter how good the effort.

“That eagle provided me with the momentum for the final,” Winegardner said. “Overall, things were good and a couple of mistakes I did make,  I attributed to being tired.”

Navarro admitted after the final that he played better in the morning and that work produced a 4-and-2 win over Teddy Zinsner, who had 14 birdies in his first two wins, but only three in the semifinal,  Navarro won the second and third for 2 up and was not headed, building a lead of three or four holes on the back nine.

In 2019 the championship will be conducted at the Norbeck C. C. in Rockville, Maryland. 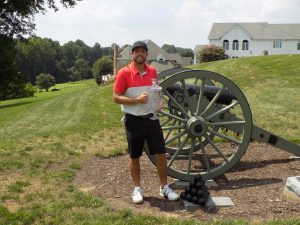