Ben Shields, from Towson and Pine Ridge Golf Course, fired a 5-under-par 34-32–66, a competitive best, and earned the medal in sectional qualifying for the U.S. Mid-Amateur Championship at the Chartwell Golf & Country Club in Severna Park, Md., August 9. There were six places available and there was a playoff for one spot among four players who shot 70.

Shields was followed by Charlie Winegardner at 67, and Mark Cusic, Matt Sughrue, and Frank Alafoginis, all at 69.  In the four-for-one playoff, using holes 1 and 18, Ben Warnquist parred the first hole to claim the final spot.  At 18, Ryan McCarthy made par to become first alternate, and Joey Rice made bogey to be the second alternate. Rick Sovero was in position to make bogey, but chose to concede and did not finish.

“All my putts were inside of 15 feet,” Shields said. “My caddy [Mike Filler, a solid player in his own right] gave me the line and I was able to make a lot of them.” He finished with 28 putts and — not surprisingly — said it was the best part of his game. Still, his overall game has improved of late — I’ve been working hard on it,” he offered. He tied for eighth in the Maryland Oen and tied for 12th in the Maryland State Mid-Am.

It capped a busy eight days for Winegardner, who won the Washington Metropolitan Amateur over the weekend, then shot 70-70 over two days to finish second by a stroke in the Maryland State Mid-Am.

The three 69’s are all veterans of this event, as Sughrue, 58, will be going to the site for the eighth time; Cusic, 39, for the fourth time, and Alafoginis, 32, for the second. Sughrue, who earlier this summer finished fourth in the British Seniors, and started on No. 10, included four birdies in his tour, but was equally enthusiastic about getting through what he called “three tough holes -17-18-1” unscathed.

Cusic started slowly with two bogeys in his first five holes, then collected four birdies, three of them in four holes (9-12), and the last at the 16th, where he hit a shot out of the woods to a foot.

It was only the second tournament of the season for Alafoginis, and he was satisfied. “I hit it pretty solid, and no big mistakes.” He ended with four birdies, two bogeys, and dipped 3-under in a run of 14 holes before making bogey at the last.

The championship will be played September 22-27 in Charlotte, N.C. 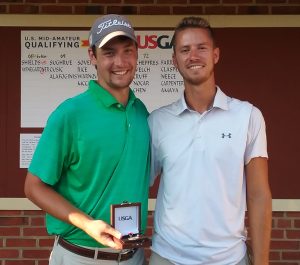