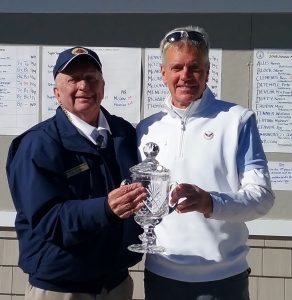 Tim Vigotsky, from Centreville, Va., made up three strokes on the front nine to overtake first-round leader Michael McCarthy, from Bethesda, Md., and went on to a one-shot victory in the 74th Senior Amateur championship of the Washington Metropolitan Golf Association at Argyle Country Club in Silver Spring, Md., October 24.

The one-shot difference came at the closing hole, where Vigotsky two-putted from 30 feet and McCarthy failed to get up-and-down from a greenside bunker, narrowly missing from 12 feet. “Thirty feet — and I somehow managed to two-putt,” the winner declared later.

Vigotsky, who had started the second round one shot behind McCarthy, moved ahead with a front-nine 1-over 37, as the former leader struggled to a 40. A McCarthy birdie at the 11th tightened matters and the two were tied going to No. 17. Both bogeyed to set the stage for the tough finish.

This was Vigotsky’s first win of the year, but the former Middle Atlantic Golf Association president had previously won this event two years ago when he finished with a three-stroke margin at Norbeck CC. This was the second strong showing by McCarthy this season as he had earlier qualified for his second U.S. Senior Amateur championship, trailing medalist Tom Winegardner by a stroke at the Elkridge Club. 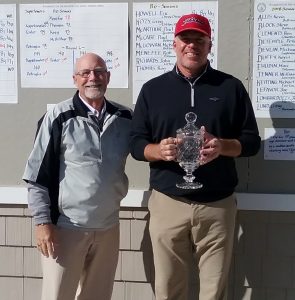 Thomas, 48, self-employed as a medical equipment broker, had one birdie in posting a second-round 75. Although a tournament veteran, this marked his first victory since the 2004 Maryland State Public Links, when he defeated Ki Moon at Mountain Branch GC. He called the highlight of his Senior triumph not making a double-bogey in 36 holes. Paul McCabe, of Bethesda, winner (with Keegan Boone) of the WMGA Four-Ball last week, used a share of the tournament’s low round, a 69, to jump into a second-place tie with Rob Menefee at 148. 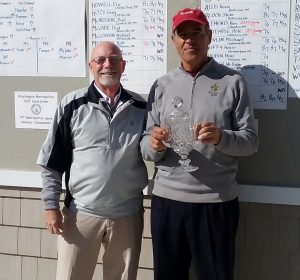 Where this marked the first time for Thomas in this event, Kapetanakis had played in it before, although not as successfully. This time, his tour included four birdies with one at the first hole coming on a 50-foot putt to get him going. The 65-year-old carded 74-69 to claim his share of the low round. Earlier, this year, he placed fifth in the Virginia State Seniors. James Foster, from Silver Spring, Md., and an Argyle CC member, was second, 74-76–150.

The Argyle CC, a staunch supporter of amateur golf in the region, saw its golf course get pretty beat up this season by the severe weather.  Not many golf courses escaped some measure of turf problems, and Argyle had more than its fair share.  The club battled back, and with the help of some mild fall weather in recent weeks, has seen its golf course make huge strides towards complete recovery.  The WMGA thanks the club for its great support and the extra effort they made to accommodate our event, as well as the MAPGA Denny McCarthy Invitational a week and half ago.  Well done Argyle and thanks!