Tim Vigotsky, from Centreville, Va., held off a host of challengers to claim his third WMGA Senior Amateur Championship won in 2016 and 2018) at the Montgomery CC in Laytonsville, Md. today.  Tied with Mark Boedicker, from Great Falls, Va., after both carded one under 71’s in round one, Vigotsky produced a solid 74 in very blustery conditions over the 6,359 yard par 72 course.  His front nine included a bogey and a birdie and his back three bogeys and a birdie (on the final hole) to finish at 145 (+1) for the tourney. 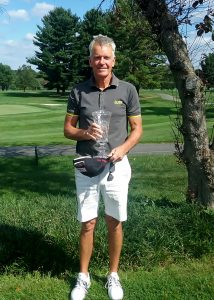 Boedicker, his nearest challenger at the start of the day, tripled the par 4 second and could not get his round going, shooting 42 on the front.  He steadied himself with a very solid 36 on the back, but by then, it was too late.

John Howson, North Yorkshire, England, (currently Sparks, Md.), opened the event with a 75.  In round two, out well ahead of the leaders, he began to stir the pot, reeling off 9 straight pars on the front and 5 pars, 1 bogey, and 1 birdie on the back for a very solid 72.  Howson, whose golfing credentials include multiple USGA Championships, is an excellent ‘wind player’, which was a great asset today.  His two day total of 147 (+3) pushed him into second place alone.

In the Pre Senior Division (45-54 years of age), Ron Thomas, Lothian, Md., won his division for the second straight year.  Bill Shifflett from Baltimore, Md., was his nearest challenger.  Thomas was five ahead for the tournament when Shifflett doubled the twelfth.  Thomas then came off the track, playing holes 13 through 17 in three over. Shifflett played the same stretch in one under, including a birdie on 17, bringing them both to the final hole with Thomas holding a one stroke lead.  Both players had birdie opportunities on 18 but neither converted, the miss far more costly for Shifflet than Thomas.

In the Super Senior Division, Skip Tendall, North Potomac, Md., opened the tournament with a two under 70. He closed with a 6 over 78 for a 148 total(+4), more the result of a long summer lay-off than the windy conditions or poor play.  He broke his left wrist in late June, an injury that required surgery, and a break from the game.  This past Saturday he clinched the deciding half point point for his team, Congressional CC, in the MSGA Senior Team Match final versus Hunt Valley.  Perhaps it  was that clutch half point that helped him prevail at Montgomery CC.  Barry Flaer, Adamstown, Md., started the day seemingly out of contention, having posted a 79 on day one, leaving him 9 back of Tendall.  While no one else made any kind of move, Flaer, despite opening his round with a bogey on the par five first, put together 13 pars and 3 birdies in the next 16 holes.  He bogeyed the par 5 eighteenth, a bogey he thought would prove costly.  It was and it wasn’t, as a birdie was needed to force a play-off.  His 150 (+6) gained him  second place.  Mike Panos, Columbia, Md., was terrific from tee to green, but an unfriendly putter kept him from gaining any ground.  “Too many three putts” he said, held him back.