Conor Trainor holed a 15-foot birdie putt on the 18th green to complete an 8-under-par round 63 and he and partner Harold Dill squeezed past early leaders Ryan McCarthy-Jack Bonifant to win the Amateur division (ages 45-54) in the 16th Washington Metropolitan Golf Association’s Four-Ball championship at Argyle Country Club in Silver Spring, November 18.

Trainor also included a 25-foot birdie putt on the 14th hole, while Dill highlighted his part of the round with an eagle-3 at the 519-yard 12th, reaching the green in two and making a 20-foot putt. Although the Ashburn (Va.) residents have played in other events, this was the first time they had played in this tournament.

Ryan McCarthy-Bonifant made five birdies in a six-hole span on the back nine (11-16), with Bonifant highlighting the efforts with putts of 25 feet at 15 and 50 feet at 16. They totaled eight birdies, but as it developed, a lone bogey at the 17th cost them a tie for first place, leaving them at 64.

Strang got his team off to a good start with a 30-foot birdie putt at the first, and he and Mike McCarthy went on to turn in 33 with three birds. The pair combined for six birdies (three apiece) in succession on the back nine (holes 11-16), with McCarthy contributing putts of 25 feet and 15 feet. They dropped a stroke at 18, when both missed the green and could not save par.  Bob Feinstein, Congressional CC, and Steve Block, Woodmont CC, tied for second at 68 with the U.S. Naval Academy GC pair of Peter Hiskey and Joe Lefavor.

Castagna (4) and Flaer (2) had six birdies in a bogey-free round and Castagna helped keep the round together when he got up-and-down from 50 yards for par at the 15th. Castagna also marked a second milestone in the last six weeks as he equaled his age with a 69 in September, then bettered it for the first time with a 68 in this event.

Notes: Grant Johnson, Arlington, Va., eagled the 488-yard second hole, hitting the green in two and making a 15-foot putt, earning his team one of the two ‘skins’ that stood up. The other was Dill’s eagle 3 on number 12. 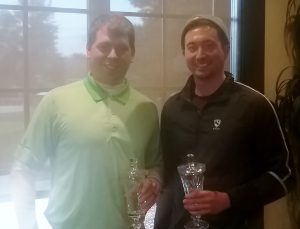 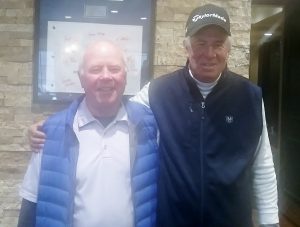