Richard Lee Latimer, Sr., better known to his friends as Dick, died April 3, 2020 of complications due to Alzheimer’s disease. Born May 11, 1930 in Washington, DC, Dick became a golf icon in the Washington DC metropolitan area.  Across his life, Dick served as President of the Maryland State Golf Association, the Middle Atlantic Golf Association, Columbia Country Club and Henry A. Latimer & Son, Inc., an insurance brokerage firm based in Washington, DC since 1919. 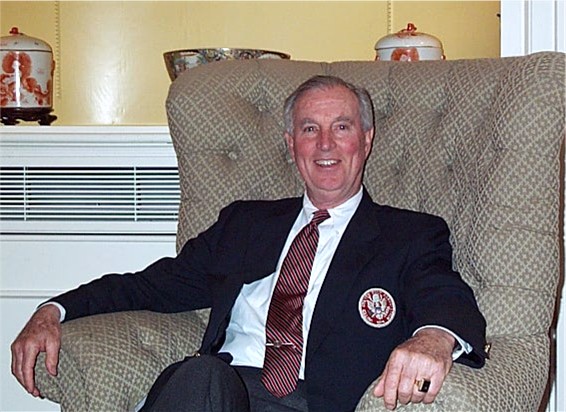 The second son of Henry A. Latimer and Helen S. Beckham, Dick grew up in Bethesda, Maryland. He attended Leland Junior High School and graduated from Bethesda Chevy Chase High School in 1948. Named to the First Team All Metropolitan Basketball team, Dick received several scholarship offers and ultimately chose Duke University, where he joined a team with All-Star Dick Groat.

At Duke, Dick joined the Kappa Alpha fraternity. After graduating from Duke in 1952 with a Bachelor’s degree in Business Administration, Dick enrolled in the Marine Corps Officers Candidate School in 1953. After serving his country, Dick joined Henry A. Latimer & Son, Inc. with his father.

For thirty years, Dick served on the USGA Junior Amateur Committee and was instrumental in bringing the 2003 USGA Junior Amateur Championship to the nation’s capital at Columbia Country Club. In 1998, Dick was inducted into the Middle Atlantic Golf Association’s Hall of Fame.

An avid outdoorsman, Dick believed strongly in the preservation of land and natural resources. When not on the golf course, he could be found with a fly rod on the Potomac river or coursing local farms with his English setters and pointers.

Dick served his community as President of the Bethesda-Chevy Chase chapter of the Izaak Walton League, the Bethesda-Chevy Chase chapter of Kiwanis, and the Norwood School Parent-Teacher Association. Dick was a founding member of Insiders Trusted Advisors and served on the board of Equitable Federal Bank. When Equitable was acquired by BB&T Bank, Dick joined its Washington DC advisory board. Dick was a member of St. Francis Episcopal in Potomac.