The championship was interrupted on Monday when storms with lightning moved into the area mid afternoon.  The horns sounded and players were evacuated well before the storm hit, but the day was over.  With lightning activity prevalent all around the area till almost dark,  we were done.  Only the 14-15 age division was able to complete their full round.  The 13 and under crew barely finished the front nine and about a third of the 16-18 group was still on the back.

Due to COVID-19 protocols, and a dire weather forecast for Tuesday, the decision was made to only keep the day one front nine scores of the two groups that could not finish.  It had been announced at the start of the event that each days play would be comprised of two stipulated rounds of nine holes each, a common practice when the possibility of major weather disruptions can occur.  After day one Dugan McCabe (Bethesda, MD) was atop the leader board with a 33 (-2).  Ferrari and John Muller (Chevy Chase, MD) were next at 34 and Danny Holden (Alexandria, VA) was alone at even 35.  Marshall Meisel (Chevy Chase, MD) and a member of the host club was at 36 (+1) with seven other players.  The race was on.

In the second round Ferrari held off Marshall Meisel (Chevy Chase, MD), a future Demon Deacon.  Meisel, two groups ahead of the leader, closed with a 66 (-4), a round that included all pars on the front and five pars and four birdies on he back.  He hit it to two feet on 15 for birdie, just missed a birdie on 16, made a six footer on 17, and had a 12 footer just miss on 18.  Ferrari, for his part, matched Meisel’s even par front nine 35 to gain a tie with McCabe who went out in 36, and maintain a two shot lead over Meisel.  McCabe birdied 10 but then lost his grip on the lead with too many back nine bogeys. 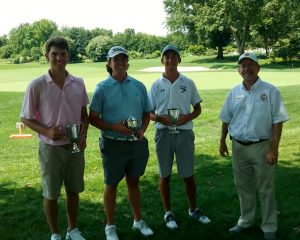 In the 14 – 15 Division  – 6,597 yards, par 70 – Luke Lombardo (Severna Park, MD) got off to a pretty good start on Monday, a one bogey front for 36 (+1).  The first five on the back saw him make 3 bogeys against one birdie, not the direction he wanted.  A par on the par three 15th set him up for a super closing, three straight birdie 3’s to end the day at even par 70.  That 70 put him three strokes clear of the next two players and well ahead of the field.  A second day opening nine of even par 35 got him started but he quickly started to give it all back, with bogeys on 10, 12, and 14.  He found steady ground with a birdie 2 on 15, a couple of pars, and then a birdie on the last for a solid 71 and two day total of 141 (+1).  Lombardo is slight of build, pretty serious when need be, and very focused.  He knows how to work his way around the course and does it in efficient fashion, with very little wasted effort.

His closest competitor was friend and fellow Chartwell G & CC member Jack Stamato (Severna Park, MD).  Stamato got off to a great start in round one, opening with a 33 (-2) on his front nine, but stumbled with five straight bogeys on 12 through 15.  His opening 73 was still in reach of Lombardo.  A topsy-turvy second day 73, which included five birdies, six bogeys, and two doubles, kept him out of the winners circle. To his credit, whenever he stumbled, he got right back up and got it going again.  At 73-73–146 (+6) he took second place.  Preston Worch (Rockville, MD), had the same sort of two days as Stamato.  Out in 34 on Monday but back in 39 for a 73, which included 4 birdies.  Still in the hunt, he started slow in round two with bogeys on three of the first five with a birdie on 6 to turn in 37.  A birdie on 10 with the rest pars and two bogeys gave him another 73 for a 146 total.  Preston earned third place silver on a match of cards with Stamato. 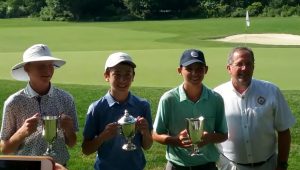 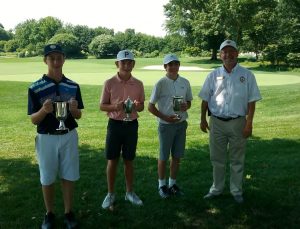 The Chevy Chase Club agreed to host the Bobby Gorin Memorial this year when Woodmont CC, the host for the lat 60 years, had to defer because of their commitment to host the U. S. Women’s Amateur next week.  With final golf course prep work and the logistics involved, it was not practical for Woodmont to hold the Gorin this year.  ‘Chevy’ filled the void in outstanding fashion, and the players were very appreciative.

The Gorin will return to Woodmont in 2021.