The annual Frank Emmet Schoolboy Championship conducted at the Worthington Manor GC concluded today.  It came down to the wire, with Stephen Betz catching and then passing two day leader Dylan Allen on the front nine – 35 vs 39.  His lead went to two when he birdied number 11 but just as quickly, it evaporated when he bogeyed the par 5 thirteenth no. 13 and Allen birdied it right behind him. right behind him.  Both players parred nos. 14, 15, 16, and 17.  Betz birdied the par 5 eighteenth for 35-35-70 and Allen made par for 39-35–74.

Betz (DeMatha Catholic HS), who calls Worthington Manor his home course, opened the week with a disappointing 79, certainly not the result he anticipated.  A very workmanlike even par 72 the second day combined with his 2 under 70 the last day, did the trick, earning him the win.  It was an important win, a breakout win for Betz, as he had been close before but came up short. This time he was able to stay patient and focused, making positive gains each day on his way to the title.  Dylan Allen (DeMatha Catholic HS), who ‘goes for broke’ was inconsistent, having streaks that were both good and bad.  In round 1 he drove the 361 yard par 4 fourteenth hole and made a ten footer for an eagle two.  In round 2 he hit three drive left into the tall ‘gunch’ and was lucky to find one of them, the second.  From there he hacked it out into the greenside bunker, blasted on on, and two putted for triple.  Despite the miscues, he always bounced back, though this time he was one short.

Betz is the second Worthington Manor player to capture a WMGA event on his home turf this year.  Three weeks ago Jon Moles captured the WMGA Mid-Am, shooting 139 (-5), on that two round day.

Carson Looney (Laurel Springs Academy) was definitely too strong for the rest of the Middle School Division players as he dominated to take that division title.  He was also too strong for the shorter version of Worthington Manor that his division played.  An even par round of 72 put him 6 shots clear of Connor Wood (The Potomac School) who took home second place.  A second round 71 earned Looney the win at 143 (-1).  Five birdies, four bogeys, and the balance all pars, was just too much for the others.  At 14 he is as long as any of the older players, and he used his length wisely and to his advantage.  In round two he hit 16 greens in regulation, no small feat at Worthington Manor.  His steady play and solid decision making produced an outstanding result, and we will be watching his progress over the coming years. 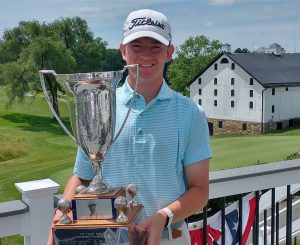 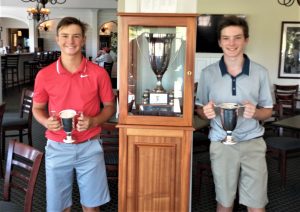 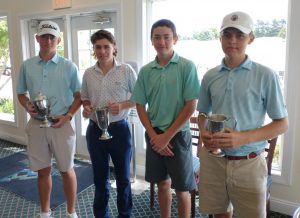 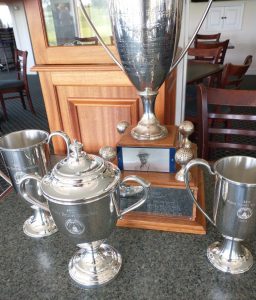