For some it is an annual rite of spring – 36 holes in one-day from close to the tips of the host course.  For others it is a check ride to see where their game stands at the start of their upcoming spring and summer championship campaign.  And for many it is simply a long day of competitive golf and chance to reconnect with friends and a rusty game.

For Jon Moles it was a chance to win one on his home course, Worthington Manor GC, by beating a very strong field.

Round one was a struggle for many with scores on the high side of the ledger.  Only Moles and Tracy Vallandingham, a seasoned competitor out of Breton Bay G & CC, matched par.  A shot back were Keegan Boone and Joe Scheffres, who had just medaled at the Hillendale CC US Open Local Qualifying site and was headed to Woodmont CC (his home course) for Open Final Qualifying.

As is often the case at Worthington Manor, the second round saw a vast improvement in morning scores, as the players got a second look, knew the hole locations a little better, and were really warmed up.  Five players broke 70 in the PM.  Tom Winegardner (Charlie’s dad)- 69, Travis Russel 69, Charlie Winegardner 69, Joe Scheffres 67., and Jon Moles 67.

Charlie Winegardner, two time defending champ (2019 & 20) went out in 30 and looked like he was going to lap the field as he had done the two previous years,  His bid stalled on the back nine when the putts stopped dropping and he made two bogeys against one birdie.  It was a spirited defense of his title.

Joe Scheffres, three groups ahead of Jon Moles was plain, old fashioned solid with 6 birdies and a single bogey, including a birdie on the last for 67, putting him in the lead at 140 (-4).  Moles, one behind with one to play (number 18) reached the par 5 eighteenth in two and knocked in his eagle putt for the second 67 of the day to total 139 (-5) and the one stroke victory.

It is not easy winning at home, and Moles felt the pressure.  He stuck to his plan (make a lot of birdies – 7 and and 1 eagle –  and minimize big mistakes – none – with just 4 bogeys), stayed patient, and bested a very strong field. 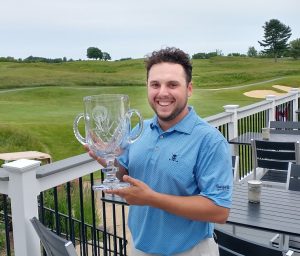 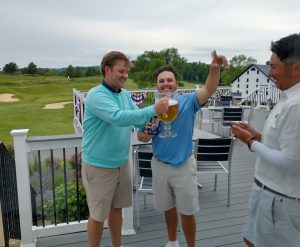