Consolidated Schedule of Amateur Events throughout the Mid-Atlantic, including USGA qualifiers ⇒ HERE

As in the past, the season will begin with the WMGA Senior Team Matches (teams of 8).  Columbia CC is the defending champion.  The matches begin in mid April and conclude in early April.  The WMGA A-Team Matches (teams of 12, including a club pro) start in early July and end on August 1.  Entry information will be included with the annual billing, which will go out the week of January 20.

The WMGA junior schedule begins with the 87th Frank Emmet Schoolboy Championship at Worthington Manor GC, Wed – Thu, June 17-19.  Next up is the 98th playing of the Bob Riley Junior Open at Belle Haven CC, Tue-Wed, July 14-15.  The Bobby Gorin Memorial which has been played at the Woodmont CC for sixty consecutive years, will move over to the Chevy Chase Club this year.  With the U. S. Women’s Amateur being conducted at Woodmont the week after, the club is unable to host the Gorin this year.  The Gorin will be a two day, two round stroke play event for 2020. There will be no match play portion this year, because of the temporary move to Chevy.  We express our thanks to Chevy for stepping up and hosting.  It is a huge commitment, especially in the middle of their season.  The junior schedule concludes with the 70th Bubby Worsham Memorial, Mon-Tue, August 17-18, which will be held at the Bethesda CC for the third straight year.  This event will again have age divisions, however, the 13 and Under Charley Ridgway Division will not be contested and the trophy is being retired.  There will be two Dewey Ricketts age divisions, 14-15 and 16-18, as , well as a Young Amateur Division, 19-24.  All players will play from the same set of tees and the overall low score after 36 holes will be the overall Worsham Winner.  These four WMGA junior events add up to 316 years of junior golf tournaments!

The men’s championship schedule has the Mid-Amateur Championship, a one day, 36 hole contest, at the Montgomery CC on Tuesday, May 26.  Charlie Winegardner of The Cannon Club, dominated the event last year, shooting 68-65–133, (-9), winning by 10 shots!  The Metropolitan Amateur, won by Nick Infanti in 2019, is being hosted by the CC at Woodmore, Thu-Sun, August 6-9, four weeks after they host the Maryland Open.  It will be a big year for Woodmore.  The Senior Amateur is at the Golf Club at South River, Mon-Tue, August 30-September 1.  South River is just below Annapolis, in Edgewater, on Md Rte 2.  The amateur schedule ends with the WMGA Four-Ball Championship,   Monday, October 12, at the Norbeck CC.  The Four-Ball will have three age divisions – amateur (54 and under), Senior (55-64), and Super Senior (65 and over).

We will conduct three USGA qualifiers in 2020.

First up is the U. S. Open Qualifier (formerly known as ‘Local Qualifying’), held at the Northwest GC on Monday, May 4. Northwest is a big golf course, and in early May, could be a monster.  This qualifier was there in 2017 and played to a par of 72 at 7,340 yards.  Kent Hagen of Upper Marlboro, MD, won the medal with an outstanding 32-34–66 (-6).  Steve Delmar – 71, Justin Feldman – 72, Mickey Demorat – 72, and Jordan Meltzer earned the other four spots.  Mickey Demorat, a recent graduate of Liberty University, has had great success in first stage qualifying, advancing to sectional (now Final) qualifying three straight years.  In 2018 he qualified at Blue Mash and then advanced from Woodmont CC to Pebble Beach, where he made the cut.  That’s a big deal!

U. S. Amateur qualifying will be held over two days (so we can accommodate over 100 players) on Monday-Tuesday, July 13-14, at The Cannon Club in Lothian, Maryland.  The Cannon Club demands accuracy and some added distance won’t hurt either

The U. S. Mid Amateur Qualifier will be farther north for us than normal, at the Woodholme CC in Pikesville on Monday, August 24.  Woodholme could also be a beast. The members enjoy the golf course as a par of 73.  Mid Am qualifiying contestants can expect it to play well north of 7,000 yards at a par of 72.  Prime the big guns for both Northwest and Woodholme.

We have some great sites for 2020, and hope you can make as many as possible! WMGA-2020-Schedule-Final 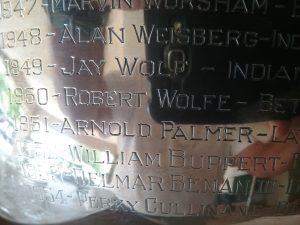