Originally scheduled for early August with a field of 130 players, the event was washed out by a tropical storm. The only available dates the club could reschedule were the late October dates of the 26th and 27th.

With the late dates, and diminishing daylight, the field was reduced to 90 players through attrition via WD’s of players who could not make the late season dates.

Carlo Pizzano, who plays for Loyola University of Maryland added a 67 to his even par 72 from round one to take the lead with just two groups behind him. His front nine of 37 put him well back of the leaders, but a six under 30 on the back vaulted him into the lead at 137 (-5).

In the following group was Rij Patel, a 2020 graduate of Harvard University and now an amateur with a real job. He was at even par 72 after round one, tied with Pizzano. After a front nine 33 for round two, he had the lead. With one to play, and Pizzano’s blitz on the back nine, Patel found himself one back on the reachable par 5 eighteenth, which has a lake down the entire left side. Forced to play safe when his drive found the rough, he laid up to about 90 yards and then stuck his third to four feet. He made the putt to draw even with Pizzano.

Matt Malits, another Loyola player, birdied 17 to get to 3 under for the tournament and two under on the round. His second to eighteen green came up just a bit short, as did his chip for an eagle and a tie with Pizzano and Patel.

The surprise of the championship may have been Tim Kane, from Kensington, MD. The 38 year old amateur has played very little competitive golf in recent years until this year. Working from home due to the COVID-19 pandemic, he was able to put together a robust tournament schedule. He took advantage of the opportunities and placed high in a number of events, including a 4th in this event, a 2nd in the WMGA Mid-Am, tied 8th in the Maryland Open, and Tied 3rd in the Maryland Mid-Am. His rounds of 72-71–143 gained him solo 4th in this event.

With Pizzano and Patel tied at 137, they played off, stating on the 387 yard par 4 10th. Patel hit his second to 10 feet and Pizzano hit his to 18 feet. After a careful read, Pizzano rolled in the birdie putt. Patel tried to follow suit, but his attempt just missed. Both players are former WMGA Bubby Worsham Memorial Champs, Patel in 2019 and Pizzano this season.

The field featured a large number of college players, including players from Poland, the United Kingdom, and Canada. 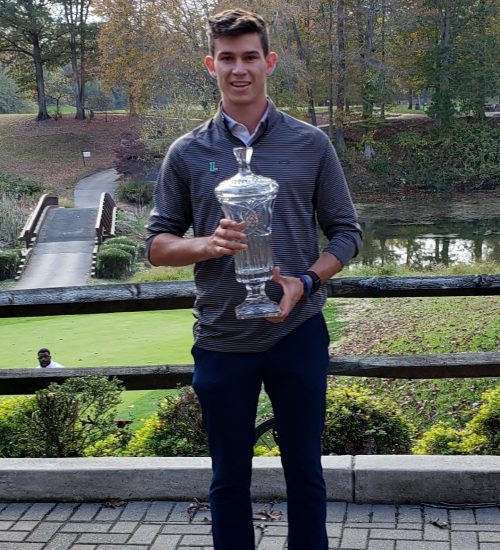